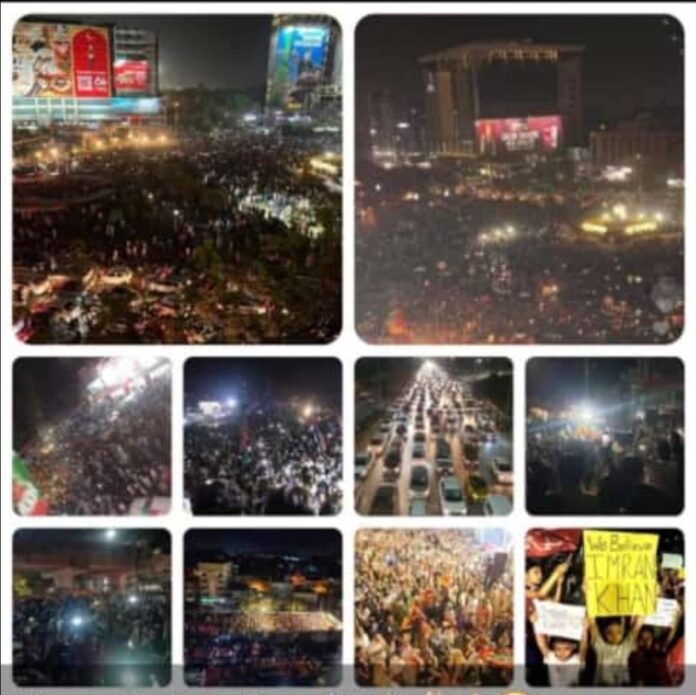 PTI workers across the country are staging protests on the call of former prime minister and PTI chairman Imran Khan, for which Imran Khan thanked the people.

Former Prime Minister Imran Khan had said on Friday that there would be peaceful protests across the country on Sunday.

He appealed to the people to come out after Isha prayers on Sunday and send a message through peaceful protest that they’re a free nation.

Demonstrations are being held in major cities of the country on Sunday night as per the schedule of PTI.

The PTI rally in Islamabad reached F-Nine Park from Zero Point with hundreds of vehicles. The rally was led by ordinary workers.

However, former federal ministers Murad Saeed and Shibli Faraz were present on the dice at F-9 Park.

Thousands of people, including women and children, took part in the protest on Imran Khan’s call.

A large number of workers participated in the Lahore demonstration

Thousands of PTI workers have staged a protest in Lahore on the call of PTI Chairman Imran Khan.

The demonstration was held at the famous Liberty Chowk in Lahore.

According to the PTI call, all the workers were instructed to gather at Liberty Chowk at 9 pm but before 9 pm the workers started gathering in the Liberty Roundabout.

Of the PTI’s central leadership, only Mahmoud al-Rasheed was present at the demonstration.

People were holding various play-cards in the demonstration while expressing anger against the removal of former Prime Minister Imran Khan from office.

Due to the demonstration in Liberty Chowk, there was a severe traffic jam in the central areas of Lahore. Demonstrators included women, the elderly and children.

In a tweet, Imran Khan thanked the Pakistanis for protesting against bringing the local Mir Jaffers, who are out on bail, into government by “changing the government in Pakistan with US support” and expressing their sentiments.

The main demonstration is being held on Rashid Minhas Road under Pakistan Tehreek-e-Insaf Karachi.

A large number of workers including women and children have started arriving in the demonstration.

Workers gather on Rashid Minhas Road with PTI flags and pictures of Imran Khan. The main stage is set up near Johar Moor.

Outside the Peshawar Press Club, PTI workers staged a protest in which protesters chanted slogans such as “Imran Tere Jan Nisar Beshmar Beshmar”.

The protesters also chanted slogans against Maulana Fazlur Rehman. The demonstration will be addressed by PTI provincial ministers Timur Jaghra, Kamran Bangash and others.

In Quetta too, PTI workers took to the streets in favour of party chairman Imran Khan. Workers on motorcycles and vehicles patrolled Airport Road, Samangali Road and various highways in the city, while PTI workers protested at Manan Chowk.

Protesters chanted slogans in favour of Imran Khan and against the United States. He said that Imran Khan’s government was overthrown under external pressure and agenda, but the people of Pakistan would defeat Imran Khan by bringing him back to power.