Pakistan Army Chief General Qamar Javed Bajwa has said that the strength of the army is the people and any attempt to create a rift between the army and the people will not be tolerated.

According to a statement issued by the army’s public relations department on Sunday, the army chief said, “Enemy forces have been doing this for a long time, but they will not succeed.”

According to the statement, the Army Chief visited Lahore Garrison on Sunday where he was received by Corps Commander Lieutenant General Muhammad Abdul Aziz.

General Qamar Javed Bajwa visited the Military Hospital (CMH) where he visited Major Harris, who was recently injured in a street fight.

The Chief of Army Staff said that the law will make its way. Those arrested will be brought to justice.

He praised the Lahore Garrison for its professional preparation and training.

He said that “speculation and propaganda may be a threat to the country’s integrity which needs a timely response to counter it.” 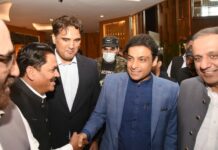